​Recent bushfire warnings included some unusual place names. Who was ‘Peter the Swede’? It was one ‘Pete the Swede’ who partnered with Big Pat O’Hannigan in the discovery of gold on the Emerald Creek that set off the Emerald gold rush.

The names of early prospectors were commonly used to identify the creeks they worked. Ben Simcox wrote that Jack Emerald or ‘Parson Jack’ as he was known was one of the earliest solitary miners to come seeking gold in the Emerald area following the 1851 secret discovery by the ‘Lucky Germans’. They were reported to have made a fortune in a month, cashed it in to the tune of £2000 and promptly headed back to Germany without claiming the Victorian government’s offer of £100 reward for discoveries of payable goldfields.

Young Ben Simcox wrote that he took up a claim beside Jack Emerald on a tributary of the Emerald Creek, the site where his ‘Nathania Springs’ would become a huge tourist attraction in the early years of Monbulk’s settlement. When this upper tributary proved disappointing, Jack Emerald departed to parts unknown leaving only his name and his log hut behind him, while Simcox returned to Collingwood.

When geological surveyors forced their way with great difficulty through the ‘densely scrubby’ Dandenongs to the Yarra in 1855 they too got lost and saw no promise in its resources other than the probability of gold. This encouraged Magistrate McCrea to assemble a prospecting party in 1858, with two Irishmen, Walsh and Geraghty. On their way to the Dandenong Ranges they collected an American, Yankee Jack McEvoy, whose brother Yankee Jim leaves his name on a creek up in the Yarra Valley, and the ruffian known as Big Pat O’Hannigan who is remembered by Big Pat’s Creek near Warburton.

Big Pat caused such trouble as they worked on the Cockatoo Creek that Gold Warden Warburton Carr had to put him in irons. Big Pat O’Hannigan was out on his own then. In January 1859 after battling through scrub where he claimed ‘no white man had ever been before’ with new chum Pete the Swede, they struck it lucky on the lower end of Emerald creek. The earliest map locates the rush to the ‘Emerald Diggings’ in 1859 as being somewhat lower down on Emerald’s main creek.

Ben Simcox returned at this point to his old claim near where Jack Emerald’s abandoned old log hut still stood. There he settled, on the basis of his miner’s right, until official settlement enabled him to establish Monbulk’s historic ‘Nathania Springs’ where he recorded his memories of Parson Jack. The Irish party with the Yank had now left the Cockatoo Creek to rejoin O’Hannigan.

‘Parson’ Jack’, ironically nicknamed for his coarse language, returned from parts unknown to prospect a small gully behind the present day Monbulk Pony Club. Diggers returning to fossick there during the depression of the 1890s passed on memories of him to Monbulk settlement’s first baby, Aldy Coulson. Emerald identity Gus Ryberg also wrote of Jack Emerald. Yet he cannot be found among official Births, Deaths and Marriages.

When four hundred diggers got together in March 1859, an inaccurate list of discoverers’ names was read out, including Pete the Swede and Dutch Harry but omitting Yankee Jack and Big Pat O’Hannigan. Walsh had claimed the Cockatoo Creek find as a ‘portion of the Emerald Diggings’ in January that year. The Woori Yallock’s eastern tributaries became known as East Emerald. ‘Emerald proper’ signified the gold camp and stores along the Emerald and Sassafras Creeks where Kirkpatrick’s store first accommodated the policeman. ‘Old Emerald’ Road began as a pack track bringing goods from Lilydale to ‘Emerald proper’. It seems a shame that municipal boundaries now divide the ‘Emerald’ goldfield at its most extensive.

‘Scotty’s Creek’ was not yet Menzies Creek while ‘Irishtown’ was sometimes used to distinguish the ‘Emerald proper’ gold camp. In May the site of the future Emerald township was surveyed and named Main Ridge, but nobody took up any blocks. The policeman was later moved there, as being more central for the ‘Dandenong Ranges Goldfields’.

As time wore on the population around Emerald diminished to around 50 or 60 individuals. A number stayed on their claims until the 1890s when forest subdivision made ownership possible within the Monbulk forest. By this time some of the storekeepers had moved to ‘East Emerald’ (Avonsleigh and Macclesfield) where they could buy land. As late as World War 1, when Monbulk’s settlers spoke of going to the Emerald stores, they meant ‘Emerald proper’ not ‘Main Ridge’.

The squabbling began in earnest in 1860 when an official hearing was set to decide who was eligible for the government reward for discovery of the ‘Emerald Goldfields’, the names now including Emerald proper, Cockatoo Creek and Scotty’s Creek.

At this second meeting (the first was March 1859) Geraghty claimed for November 1858, before Big Pat’s find. He was asked to describe the area but couldn’t. ‘He couldn’t,’ Gus Ryberg commented. ‘He was illiterate’ – not unusual among the Irish rebels. Helpfully the chairman asked, ‘What does it remind you of?’

‘The Emerald Isle,’ replied Geraghty, a surprising description of impenetrable forest and the ‘Bald Hills’ as the diggings along the Woori Yallock Creek became known. A newspaper reporter’s mention that the diggings were named for the ‘Irish party’ which was no doubt a welcome assumption. However, this second meeting settled nothing.

A Select Committee on Gold Prospectors tried again in 1863. The principal speaker was Henry Frencham, an educated Irish squatter from Warrandyte. Geraghty said, “It was he who named the diggings the Caledonia (the Plenty), the Britannia (Warburton, then known as Yankee Jim’s) and the Emerald.” Local use of the Emerald name conveniently now commemorated both the reported first prospector and the Irishmen who struck it rich – but not the Dutchman, the Swede or the Yank.

Next Big Pat O’Hannigan claimed alone, without Pete the Swede, for ‘Emerald proper’ and for Warburton (‘Big Pat’s Creek) a year later. McCrea counterclaimed for the Emerald, Britannia and Nicholson (McCrea’s creek) goldfields, giving the names of three of his mates but adding Geraghty and O’Hannigan only after prompting. Warburton Carr wrote, ‘When I first heard the name of Mr. McCrea as the discoverer of some goldfields there, I thought there was some misapprehension.’

When Pete the Swede (Peter Petersen) turned up to make a claim, the reward had already been dispersed. It now seems he very likely headed north.

THE SKULL IN THE MOUNTAIN STREAM 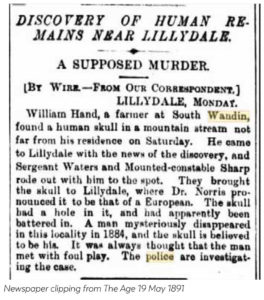 So, what of Jack Emerald? There are no official records of Jack Emerald’s life and death, but ‘absence of evidence is not evidence of absence’. In the Gold Rush years, disorganisation and lack of official manpower led to many gaps in the records. Did he have reason to use an assumed name? Did he jump ship, leaving no clue to his birthplace? Did he never marry? Why no death records? Whatever happened to Parson Jack? Did he gain enough from his claim to take up a cattle run to the south as Gus Ryberg said and just move on again to parts unknown? Perhaps he was murdered for his gold as Simcox wrote, or was this just assumed because he disappeared mysteriously?

There were many murders and disappearances in the chaotic Gold Rush days. Bodies lost in the bush by accident or intent were not always found. Even a dead kangaroo can completely disappear within a couple of weeks as its bones are cleaned and scattered by predators.

When the policeman was summoned from Main Ridge to the Cockatoo Creek in the 1870s to investigate some trouble over miners’ rights, only his helmet and saddle were found at his campsite. His body was never recovered. Without a body how are date, location and cause to be established and recorded, and in this instance, to whom?

When a battered European skull was found in a mountain stream near Silvan in 1891 it was assumed to be that of an unnamed man who had mysteriously disappeared in 1884.

Was it Jack Emerald’s head, washed down in floods and carried on to Lilydale just as his name began to flood over the area?