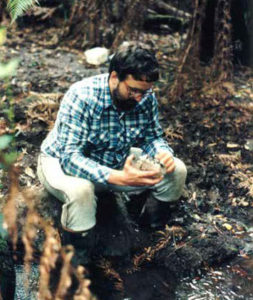 When the August Messenger reported tree planting planned for Butterfield Reserve and the presence there of the Helmeted Honeyeater, my mind returned to the past and my listening post.

Lying between Wards Road Reserve and the Woori Yallock Creek that link to Butterfield Reserve at the end of Old Emerald Road, the dense regrowth on my bush block forms a wild life passage where unseen passers-by are many. I duly learned my list of visible birds and native plants.

My teenager’s interest in ‘big cat’ stories led us to meet with Peter Chapple at Clematis. Only Peter ever saw a Helmeted Honeyeater on my property. My area held great interest for Peter, whose life since early primary school, was divided between his glorious voice and research on native animals.

I joined up initially to support my teenager’s interest. How my jaw dropped as Peter flipped through some of the thousands of ‘big cat’ sightings reported in Victoria and beyond, many close by.

Assisting Peter extended my world. He knew all the sounds of the bush and recorded many of them. Now I had to learn night noises. I was amazed by the clarity of the sounds of the night. After moving in, a noisy party ‘down the track’ turned out to be way up over the hill in Emerald, but sounded more like next door! So the listening distance covered a vast area with direction readily discernable.

Peter heard where I lived with a gasp. He took two friends down a wallaby track through my tangled fern, crossing on a log to a small cleared patch of Avonsleigh pasture. There they pointed out a gum tree where they had recently found a dead goat hanging several metres high from a branch.

My bedroom window became my ‘listening post’. I frequently listened during the evening, occasionally into the morning hours, making notes of unidentified sounds for Peter to assess. My dog Sally also listened and later tracked.

Early in 1992 distant dogs became particularly agitated and sometimes quite hysterical. I recorded time, description and direction of noises for Peter’s interpretation, as something moved around the area. The ‘dog ag’ took up the cry along the creek, usually heading upstream, perhaps from Yellingbo, towards Butterfield Reserve. Our researchers followed to seek footprints and other signs. Other reports were added to our ‘dog ag’ sometimes by people round about, quite unaware of our information – a big cat sighted along the Emerald Creek, a suspicious predation higher up, then a scat. Signs indicated a large predator circling from the Woori Yallock.

Peter and I went together down Old Emerald Road to investigate the usually deserted Butterfield Reserve. He pointed out a tree branch overhanging the track as showing signs of regular scratching and lookout use typical of big cats. Then by the water he found prints that excited him. Still weak after surgery, Peter had made no attempt to carry his usual equipment, but later returned, alone and exhausted, to obtain plaster casts.

They were not typical of big cats however. What accounted for his excitement was their likeness to the toe and heel pads of the Tasmanian tiger.

His tape of an unfamiliar call heard one night where such a striped animal had been sighted, answered the description of one typical Thylacine call – ‘an indrawn breath followed by a coughing bark.’

Later, at my listening post I got the same call on tape as something ran up my side fence towards Butterfield Park. Folklore assumed ‘deer’ when nobody could identify it as anything else but no deer were reported in my time there. Sometime later, in Peter’s absence, I followed up a clear ‘stripey’ sighting in Cockatoo and now have my own distinctive front-feet plaster casts.

When Peter wrote to the then State Premier offering to present this mass of evidence, the reply politely declined, ‘as there isn’t any evidence’!

The Thylacine gradually became the focus of the Australian Rare Fauna Research Association. Peter was reworking his thesis after having his computer disc stolen, when tragically we lost him to a heart attack, aged 48.

So now you will be asking – ‘how far were you from the nearest pub?’ It’s true I make assumptions. One night we parked silently on a busy dead end in Avonsleigh, for instance, where a week before a lone lady recorded her startled cry as a huge cat stalked around her car and her terrified little dog crept under the car seat and wouldn’t come out. As Peter turned his flashlight past a head rising above thigh-high grass, my brain assumed it belonged to a wallaby.

Then my startled eyes denied that wallabies have kitten faces and spotted chests as they stand to see above the high grass. Yes – they! A second head popped up beside the first. Then the turning spotlight picked up the long dark felid shape of their mother slinking back towards them, distinctively different from a stray pussycat.

Now go ahead, assume that we were drunk, hallucinating, lying, unable to differentiate between species, clutching at folklore. We must be – as there isn’t any evidence!

Again, some years later, I took my Sally out the back door for her midnight walk. Suddenly she propped and pressed hard against my leg. A snarl I’d never heard before rang out from pitch darkness, close in front of me.

I froze. My body alone experienced every reaction of terror, while my brain calmly wondered what the unknown noise could be, before deciding it would be a good idea to return inside. I heard a further warning snarl then the cries of a panicking tethered goat. I ran out with a torch and heard the sound again, heading towards Butterfield Reserve. Luckily the goat survived.

A week later, I heard it again from inside while at my computer. Identical! Again my blood ran cold, hair stood on end, etc. ‘Whatever’s that?’ I whispered to my boy. ‘Just the puma from the San Diego zoo,’ he said.

One more week and I heard it again close to my front door where the dog, safe behind the security door, went crazy to the tune of even more blood-curdling threats. The goat barely escaped strangling itself as it raced around a tree until it collapsed, but again it was spared.

So there you are. Along with all those thousands who continue to encounter big cats – I must be drunk, crazy or stupid as ‘there isn’t any evidence’.