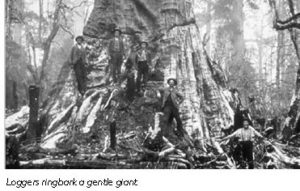 Recent wild weather has brought sad news of lost homes and lost lives, road blockages and narrow escapes as trees fall in the Dandenongs. The tallest trees in the world once grew here. Botanist Daniel Bunce was the first climber known to penetrate the forest with the help of a Woiworung guide. From The Basin to Clow’s Glenfern he peered through formidable undergrowth, marvelling at the abundance of wild life at every level.

In addition to the giant eucalypts, the gullies once held excellent furniture timbers. Blackwood, sassafras, musk and hazel tempted the first few woodcutters to the Dandenongs in the early 1840s. Sassafras, treasured for its medicinal properties, gave its name to the Sassafras Creek. Sassafras roots and leaves were used both internally and externally for a wide variety of ailments, in spite of some poisonous detrimental side effects.

After the disastrous 1850 fire, loggers soon returned to the mountain. The Glenfern and Mun Bulk settlers  were  able  to make an ascent following fire-cleared ridges. By 1853 Government botanist Baron Von Mueller attempted the ascent. From a base camp at The Basin, Von Mueller soon found that to be impossible, “but not without making many bold efforts and frequently ‘measuring our length’ on the ground.”

Assisting Von Mueller was botanist David Boyle who measured one fallen tree at 480 feet in length (146.3m). Another had a diameter of “twenty five feet through” (7.6m). The famous Californian redwoods well exceed that thickness at the base, yet their ‘tallest in the world’ is reported at 379 feet. Another fallen giant in the Yarra Valley was measured at 435 feet with its top broken off by the fall.

Only after they found a timber track did the loggers reach the summit of Mt Dandenong. A quarter of the finest timber trees had survived the fire, their clean trunks bare of branches for 200 feet up. Yet the barriers of damp, narrow ravines had often survived.

Following the direction of Baron Von Mueller to the Olinda Creek, city woodworkers found magnificent stands of mountain ash, peppermint, messmate and stringybark that had survived the 1851 fires and they settled there on Miners’ Right. This formed part of the boundary of the 1867 Dandenong and Woori Yallock Forest.

Exploitation had begun and splitters, following the discovery of gold, invaded the hills. Melbourne’s exploding population burnt its surrounding timber for firewood and clamoured for timber for housing, furniture, bridges and wharves. Yet it was cheaper to bring timber from Tasmania than to haul it to Melbourne from the Dandenongs. Two 100 foot ships’ masts in Mast Gully required 26 bullocks to pull each one. When one was sawn in two by a practical joker it took another month to retrieve a third.

Working their way toward Monbulk, Holden Road marks the birthplace of a bush baby, as Jeannie Gunn related: “Mark was born in the little family hut and as the father sat on the outside door step, he suddenly heard the baby cry. Jumping up in tremendous relief he trod on a very young sapling, bending it sadly. But because nothing must die that night the father stooped and straightened it, and tied it carefully to a post, and for over 60 years a great gum tree, tall and straight, held its own. This became known as Mark Holden’s tree, until a bushfire took it in 1913.” From an early age, Mark and his brother Luke became expert splitters.

Along the Woori Yallock Creek, the red soil of ancient lava flows give way to the yellow clay and stunted timber of the Bald Hills where the trees had succumbed by this time to miners along Old Emerald Road. The gullies however still held trees that gave valuable eucalyptus oil.

Some miners stayed on to work the timber. Timber mills began to appear and splitters moved in further. Bereft of their supportive companions throughout the diggings, trees were more likely to fall without warning. A splitter working alone at Healesville was pinned by a falling tree and eaten by wild dogs. Another who was caught by the hand and unable to get free, starved to death. A man charring stumps for Nobelius at Emerald saw the tree coming down and ran for his life. Working with a peg leg after a previous accident in the timber, he fell when his peg leg sank into a yabby hole. He was killed instantly.

Selectors adjoining the state forest, more interested in crops and herds, cleared the trees regardless of value or beauty. Their stock fattened there, living unfettered on wiregrass and hazel without charge. Many settlers cleared their land hurriedly to allow the planting of orchards and market gardens. They denuded One Tree Hill.

By 1870, efforts to protect the forest for the future had become necessary. On Mt Dandenong, splitters and pitsawyers were carting out not only timber but hundreds of tree ferns, while sawdust from the timber mills polluted the Olinda Creek. Stripping bark, lighting fires and the removal of tree ferns were all then forbidden.

At the end of the 1870s, Isaac Simmons found an excellent patch of messmate for palings, to which he brought his family. With a baby on her knee, Harriet sat in an easy chair on the bullock dray while half a dozen children swung their legs over the side as they jolted through the forest. ‘The Patch’ of wide space he opened in the forest canopy to protect his family became a landmark, obvious from every hilltop around. It is where The Patch store now stands.

By the time of the Centennial Exhibition in 1888, the giants of the forest were vanishing fast. Isaac Simmons hauled one of them to the train at Narre Warren. With a girth of 66ft “at the point of ringing”, the tree had suffered in a bushfire, leaving a hole in the stump big enough for a man to get inside with a ripsaw. Edwin Johns watched Jonathan Meyer of Emerald and one of Willis’ workers, and with one working on scaffolding outside, they reduced it to sections for transport. It later stood in the Fitzroy Gardens.

Another giant hollow stump provided living space for the Masch family. For decades after David Boyle’s discovery of the huge tree in the Sassafras Gully, tourists marvelled at the isolated fallen giants, one 66ft (20m) in circumference. How much time will it take to replace these giants of the primeval forest that fire and industry have despoiled?

Timber preservation and environmental nurture are of the utmost importance. As Earth’s forests diminish, humanity’s survival is threatened. 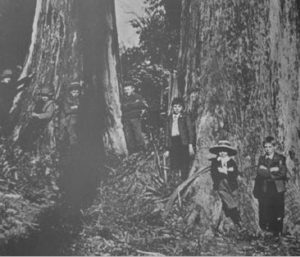