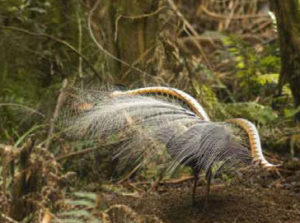 Many aboriginal artefacts were found at Butterfield Reserve, others on the Emerald, Sassafras, Menzies and Woori Yallock Creeks but very few of their makers were found in the area. Gold prospectors perhaps were too intent on fortune hunting to take an interest in Aboriginal artefacts although they must have found them while diverting, draining and damming springs around Old Emerald Road.

Many spears and stone axes were found on the site of the present Monbulk football ground, a peaceful meeting area for neighbouring clans. A number of camp sites used for seasonal visits were known in the Dandenongs. A very sacred site was spoken of in the Olinda area.

The Woiworung group who roamed the Yarra Valley and the Dandenongs were cut off from the sea by three other Bunurong groups (all Kulin people) whose country spread around the two bays and the foothills of the Dandenongs. In 1802 the Bunurong had their first encounter with Europeans when Matthew Flinders landed. He was followed, disastrously, by sealers who settled on Churchill Island in Westernport Bay for four years until the Bunurong moved in and burnt down some of their buildings.

A twelve-year-old Woiworung boy, Billoo, was amazed to view the boundless waters of the sea when he ventured south through Bunurong country after viewing a smoke signal in 1803. He encountered a ‘spirit-man’ with a terrifying weapon. Yet curiosity overcame his fear of a pale William Buckley who had escaped from the Sullivan Bay convict settlement in Sorrento. Its abandonment after a few short months left him in isolation. He travelled around Port Phillip Bay eventually reaching the area near Barwon Heads where he lived with the Wathaurung people for the next 32 years.

Botanist Daniel Bunce ascending Mt. Dandenong in 1839 encountered a party of Wurrunjerri hunters and joined them. He shared roasted kangaroo with the men while the ladies got the scraps. They brought their quarry to show him – lyrebirds, gliders, wombats, echidnas, possums. The ‘astonishingly lovely’ women brought him manna gum from the eucalypts, lightly grilled grubs, and roots of the yam daisy. They roasted roots of orchids and lilies and shoots of ferns and bulrushes.

The Patch was said to be one summer meeting place and Clematis held a ceremonial ground. Other sites have been found at Yellingbo, Silvan and Woori Yallock. In Mooroolbark and at Cave Hill ceremonial sites remained in use after settlement. Squatter Tom Turner of The Basin was shown the Cave Hill site by aborigines and guided surveyor Hardy there in the 1860s. Mt. Dandenong held mythological significance with corroboree grounds and taboo areas around Olinda. The name Bald Hill was applied to a burial place now within the Cardinia Reservoir catchment. No hunting was permitted in this vicinity but implements found on nearby ‘Aura’ suggested a camping ground.

Long-term camps were usually sited on level ground near water where fish and wildfowl abounded, like Butterfield. Monbulk was a particularly important site for tribal gatherings, meeting peacefully with other groups, and bathing their sick and injured in the healing waters now known as Nathania Springs. Here and on the present football ground on the ridge between the Emerald and Sassafras Creeks many artefacts were left behind.

Mrs Aeneas Gunn author of The Black Princess and We of the Never Never, published in 1905 and 1908 respectively describes the origin of the name Monbulk as, “Monbolloc, literally ‘a hiding place in the hills,’ in other words, a sanctuary. It was there — actually exactly where the township of Monbulk now stands — where all the tribes came in for conferences, shall I call them? The meeting of the tribes, my old blackfellows called it. Yarra tribes, Gippsland tribes, coastal tribes and the more northern tribes about Marysville.”

In 1850 William Thomas, the Assistant Protector, described corroborees at Monbulk – “the song and motion was like our country dances and reels with as much sense in either. In any case if the black orchestra was inferior, their time and motion was better!”

Two abortive attempts were made to establish a native police force with the opportunity to beg bread and booze diverting people from hunting. They were forbidden to eat the sheep and cattle that now occupied their land. Drunken individuals and wandering bands with diseased dogs offended the sensibilities of the Melbourne merchants. Settling them at Narre Warren would, they hoped, free them from these uncivilised nuisances.

In 1842 Protector William Thomas brought together chief Billibellary of the Yarra tribe (who has been identified as the Billoo of the story) and Sandhurst-trained squatter Captain Henry Dana, to discuss a further attempt at establishing a force of native police. After a week’s consideration, Billibellary led a party of young men to enrol.

In the early 1850s, the white police in charge kept a loaded shotgun in every room in case of aggression among the aborigines. On at least one occasion an aborigine had needed to seek sanctuary in his sergeant’s home after an attack from others of his people. Until the Corps ceased operations in 1853, drinking and fighting were rife among both black and white. The introduction of the white man’s weapons made internecine warfare more deadly and his guns, diseases and alcohol were often fatal.

By the time these observations were made in the mid 1850s the remnants of different aboriginal groups had been forced to band together as one tribe. The Kulin numbers, never great, had been thoroughly decimated by disease and conflict. Even before the arrival of the white man the tribes who visited the ‘hiding place in the hills’ had been affected by epidemics, notably smallpox, originating in Sydney and transmitted from tribe to tribe.

The last corroboree of the Bunurong was recorded in 1858 and in the 1880s a lone old man was seen fishing the creeks of Macclesfield.

To the settlers of 1893, these people were not even a memory. They left no trace of their passing but their place names, often corrupted, and their forgotten artefacts. The last full-blood Wurrunjerri, William Barak, died in 1903.